Jean Claude, a Compassion alumnus, forgave the one who tortured and murdered his family—and even provided for his son’s education.*

I was born in the country of Rwanda in Kigali City, but I was born in a poor family where getting food was a problem. Where going to school was a problem. To survive was hard. In Rwanda, a child starts nursery school at age three. But for me at three years, there was no hope of school. Four years, no hope. Five years, no hope. But because of God, one day people came to my home from a church. They were seeking children to support. God directed them to my family and they said, “You have a little boy here, bring him tomorrow to Compassion at the church.” 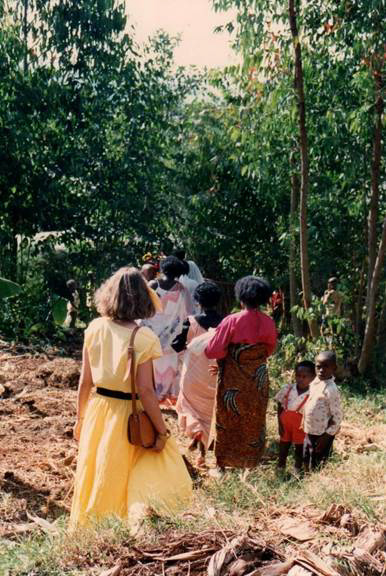 Jean Claude, in the red overalls, was registered at age five in Compassion’s program in Rwanda in 1988.

We went to the church, and they took a picture of me. From then, I started to go to school. When I joined the Compassion program at the Methodist church, the first thing I got was to know Jesus. My family did not believe in God. But they taught us stories about Jesus. When I came home, I would share them with my family.

They taught us about hope at Compassion. They used tell us, “Even if you were born poor, Jesus loves you. Jesus has a good plan for you. Maybe you could be this or that or this.”

I learned love from Compassion. Love. Love. Love. It’s a word taught every time in the Compassion program. “Love each other as God loves everyone and decided to give his own Son.”

The genocide of the Tutsi people happened in Rwanda in 1994. It was terrible. The Hutus killed the Tutsis. But Hutus were not people who came from other countries or from far away. They were our neighbours. They were our friends. It was surprising to see where a husband would kill a wife. Where a wife would kill a husband. Where parents decided to kill their children, saying they were Tutsi because of the background of the spouse.

A group of 12 people came to my house, and I went to hide behind the fence. I saw everything. And also my sister was there. She was killed very badly too. Also, my aunties and uncles were killed because we lived together in the same place.

My mom didn’t get killed, but she was beaten. She had trauma from that day. Now she’s living with a mental disability because of everything she has seen. From the genocide until today, she has taken medicine every day.

“Oh, maybe this one’s father killed our parents. How can we share Jesus together with them?”

Those workers, they had a big, big job. First, they had to comfort us, to encourage us. But it was hard. We were still living with the people who killed our families. Before the genocide, we didn’t think about who was Tutsi and who was Hutu. But when we came back to Compassion, there were Hutu children and we thought, “Oh, maybe this one’s father killed our parents. How can we share Jesus together with them?” But Compassion did a great job to give us hope again. To teach us about forgiveness.

They also would give us food and livestock. They gave me a goat. The goats helped us rebuild and restore our family. 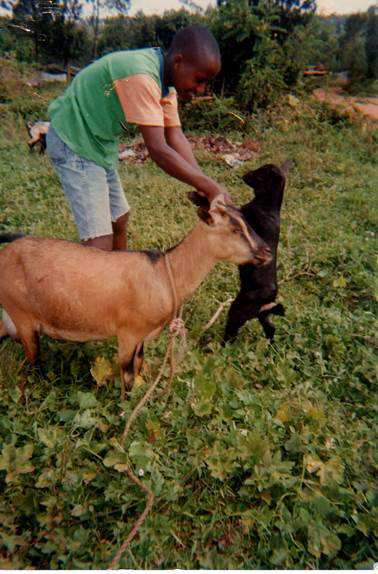 Jean Claude received a goat from Compassion to help his family rebuild after the genocide.

Compassion is where I came to know Jesus. Eventually, I forgave those who killed my family. After 2004, I created an organization called Best Family Rwanda for children. Most of the children are Hutu, from the families who committed the genocide. If I could not forgive, I would say, “No, I only will help Tutsi, only genocide survivors.”

But I had one child sponsored in my organization whose father was in the group that killed my father. They were neighbours. After the genocide, the father was imprisoned for his crime. So when I was selecting children to help, I said, “bring his orphan. He doesn’t have a father.” That is forgiveness.

“But I had one child sponsored in my organization whose father was in the group that killed my father.”

When Jesus was on the Cross, he had the capacity to say, “Kill them father.” But he said, “Father, forgive them, for they don’t know what they are doing.” That is forgiveness.

I love that child of my father’s murderer. He has been supported since high school, and now he’s attending college.

Hard work, success, and giving back

Because of Compassion, I am who I am today. Because of the education they allowed me to get, I grew up with hope and I gained the purpose of rescuing my family from poverty. When I was at school, I studied very hard, and God helped me. I graduated high school with high marks and went to a very good university to study Law. When I graduated, I became an attorney. Now I am the legal advisor for the Compassion Alumni Association in Rwanda. It’s my way to give back. 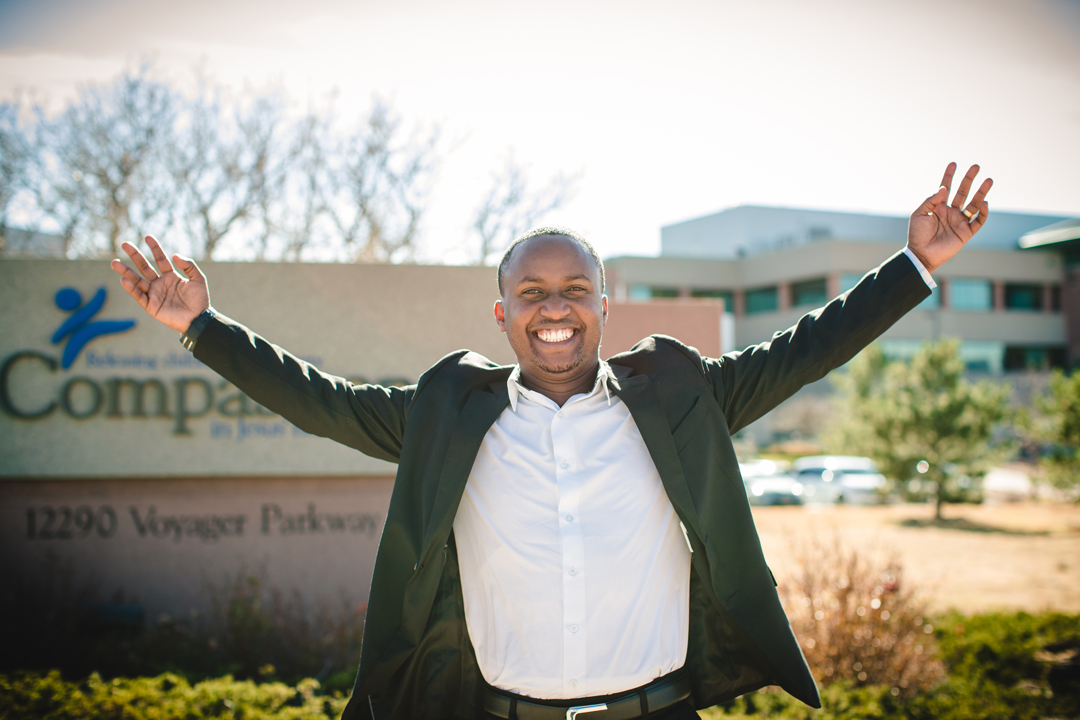 In 2004, because I loved Compassion so much and how they taught me the Bible and how I and my family changed, I collected some orphans together. We taught them about Jesus and we taught them to help each other. We gave them hope and encouragement to work hard. Today I have more than 200 children sponsored in my organization, Best Family Rwanda. This inspiration came from Compassion, because from Compassion I learned to teach love, to teach God, and to teach hope. 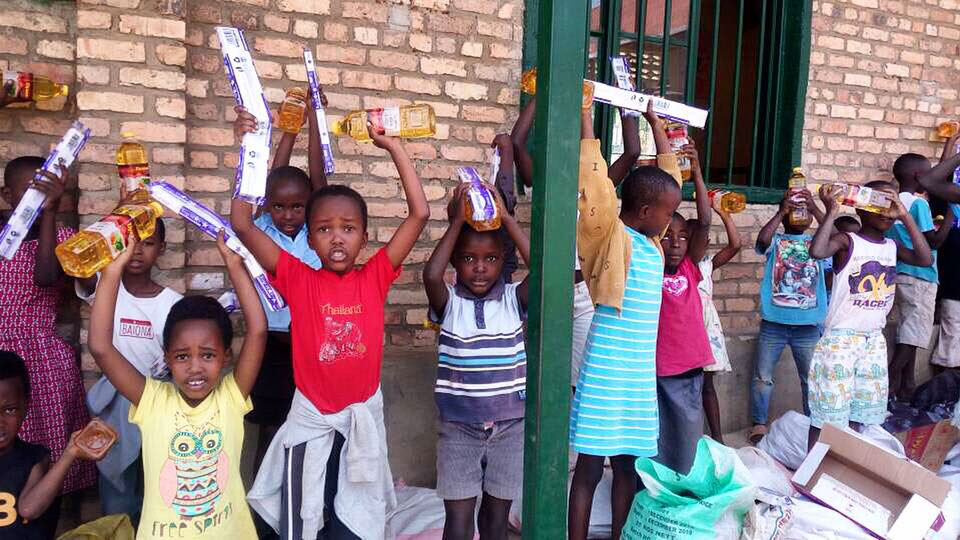 Some of the 200 children being supported holistically through Jean Claude’s organization, Best Family Rwanda.

You invested in a seed. It’s something you put under the ground, and it grows up into a tree and begins to have fruit. I can say that I am a seed from Compassion.

Jesus taught His disciples, “You learned from me; you spent years with me. Today it’s time for you to go and share the gospel all over the world.” Compassion invested in me, built me up, and today I am going.

*Adapted and edited for length and clarity from an interview conducted by Compassion International.

** After the genocide, most churches that partnered with Compassion had to stop operations—so our ministry shifted focus for a time from child development to child rescue, as 300,000 orphans were created in just a matter of days. After two years, Compassion was able to begin holistic child development ministry again.

Releasing children from poverty in Jesus’ name is a mission about love. We love God, and we demonstrate our love and live out our faith by extending care to others. We offer our programs to the poorest of the poor, to the children in greatest need, without ulterior motive.

Nathan joined Compassion International in 2003, he served in different roles Sponsor and Donor Ministry Analyst, Partnership Facilitator and Sponsor & Donor Services Supervisor. He is married to Consolate Mukabaranga and blessed with two daughters and one son; Precious Mugwisa, Praise Mugwiza and Pleasant Mugwisa.

He is a Certified Human Resource Manager by the HRCI/ World Wide E-Learning (WEC). He holds a Master’s in Organizational Leadership & Management from Uganda Christian University (UCU).

Etienne came to Compassion in 2000, and has served in many roles over the years, most currently as Partnership Supervisor. He has a master’s degree in Child Development from Daystar University and a bachelor’s in Education and Psychology from the University of Rwanda.

Pascasie joined Compassion in 2005 and has served as Finance Associate, Accountant and Senior Accountant for the past eight years. She is married and blessed with three children; two sons and one daughter:  Aime Boris (24), Merci Leger (16) and Anne Stella (15).

She holds an M.B.A. in Finance and Banking and B.A. in Business Administration.

Eugine joined Compassion in August 2011 as the Program Director, a role he holds to date. He is married to Jennifer and they are blessed with three sons and one daughter; King, Mteule, Noble and Covenant. Eugine holds a M.A. in Cooperative Management and a B.A. in Business Administration. He is a Certified Project Manager (PMP) and he is a CompTIA Project+ Certified.

John joined Compassion Rwanda eight years ago as the Country Director. He is married to Livine Karara and they are blessed with two sons and one daughter: Levi, Agee, and Iris. John holds an M.B.A. in Finance from Maastricht School of Management (Netherlands).